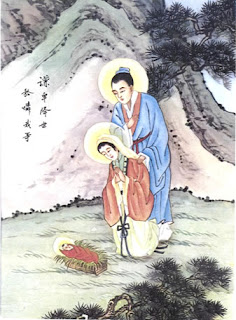 There are various terms used for God in the Chinese language, the most prevalent being Shangdi (上帝, literally, "Sovereign King Above"), used commonly by Protestants and also by non-Christians, and Tianzhu (天主, literally, Lord of Heaven), which is most commonly favored by Catholics.

While Christianity is referred to as 基督教 (Christ religion), the modern Chinese language typically divides Christians into three groups: believers of Protestantism Xin jiaotu (新教徒, literally "new religion followers"), believers of CatholicismTianzhu jiaotu (天主教徒, Lord of Heaven religion followers), and believers of Orthodox Dongzheng jiaotu (東正教徒, Eastern Orthodox religion followers, but more correctly "zhengjiaotu" 正教徒, because there is only one Chinese term for both Eastern and Oriental which is "dong" 東 and simply means the east. The latter term is more correct also because Eastern Orthodox churches are not in communion with and thus differ from the Oriental Orthodox churches.)

Chinese terms for God, especially a "Supreme God", have produced many variations for the title. The oldest records of the term Westerners translate as "God", "Most High God", "Greatest Lord" appear to exist in the earliest documents of Chinese literature as Shangdi (上帝, pinyin: Shàngdì, literally "Above Emperor"). This representation may be as old as 2000 BC or older, with the earliest documentation around 700 BC. However, as Chinese religion changed to incorporate later interpretations of Confucianism, Daoism, and Buddhism, the term seems to have merged, in the views of some philosophers, with an impersonal Shung Tian, or heaven. (See Shangdi, Pangu, Tian, and Chinese Mythology, for examples and details.)

The following is not necessarily a representation of how the word "God" would actually be translated from the Bible. For example, the first occurrence of a term for God in the Bible is in Genesis 1:1 and is rendered in the English as "God". However, many other titles (such as LORD — usually capitalized, as a replacement for the tetragrammaton — Almighty, etc) are also used.

The earliest introduction of documented Judeo-Christian religion appears to be Jǐng jiào (景教, literally, "bright teaching") around 635 AD, whose proponents were from the Assyrian Church of the East, often inaccurately referred to as Nestorianism. Their term for God was Zhēnzhǔ (真主, literally "Veritable Majesty", or "True Lord").

The earliest documented Chinese Roman Catholic church was founded in China in about 1289. The Roman Catholic Church historically favored Tīanzhǔ (天主, literally, "Heavenly Lord", or "Lord of Heaven"), and so "Catholicism" is most commonly rendered Tīanzhǔ jìao (天主教), although among Chinese Catholics the literal translation of "catholic", Gōng jiào (公教), is also used. Korean and Vietnamese Catholics also use cognates of the term Tīanzhǔ for God. This appears to have been used by the Catholic Church to separate Confucian traditions, which were reported to worship spirits and therefore incompatible with the exclusive biblical worship of God. Ironically, although versions of popular Confucianism became strongly associated with idol worship, traditionalists, notably the Qing emperor Kang Xi, did not believe that such idolization accurately reflected Confucius's intent.

The earliest Protestant missionary to China, Robert Morrison, arrived there in 1807. Before this time, Bibles were not printed for distribution. Protestantism is colloquially referred to as Jīdū jìao (基督教, meaning "religion of Christ") but this term can sometimes refer to all Christians, so Xīnjìao (新教, literally, "new religion") is also used to distinguish Protestants as a group separate from Roman Catholics. Their translators, coming to China later and separately, chose to use the older terminology "Shangdi", apparently believing Shangdi was a valid or preferable representation of the "Most High God".

The term used commonly in Protestant Chinese bibles for God is Shén, or "神". This term is much more generic, meaning god, God, spirit, or soul. This probably appeals to groups who are not committed to interpreting Shangdi as a historical or spiritual equivalent to the "God Most High" of the Bible. The issue has remained controversial for over a century and Protestant organizations have published two versions of the Bible, using the two different words.

In addition, the Tetragrammaton, a four letter pronunciation of the name of God from the original Hebrew often rendered as "YHWH", is rendered in different ways. Catholics have translated this into Yǎwēi (雅威, literally "Elegant Powerful," cf. English "Yahweh"). Protestants originally rendered it as Yéhuǒhuá (爺火華, literally "(old) Gentleman of Fiery Magnificence," cf. English "Jehovah"). A modern Protestant usage is Yēhéhuá (耶和華, phonetic). Some versions translate this term as Shàngzhǔ (上主, literally "Above Lord"), similar to the translation decision that uses a capitalized "LORD" by both Catholics and traditional Protestants. Catholics, Anglicans, and Lutherans particularly use Shàngzhǔ in prayers of the Eucharist.

The term Zhǔ (主,literally "Lord") is used by both Catholics and traditional Protestants in list formal prayers, and usually by contemporary Protestants.