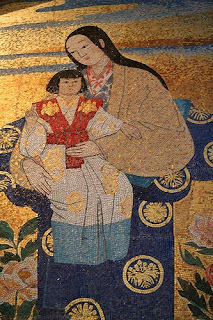 Nearly all known traditional denominations of Christianity, including Roman Catholicism, Protestantism, Orthodox Christianity are represented in Japan today. There are no restrictions on evangelism in Japan. However, Japan remains one of the most secular nations in the world according to the World Values Survey. 70% of Japanese churches have an average attendance of less than 30, though membership is double this figure. Christians in Japan are a religious minority, making up about 1 million to 3 million persons.

The twentieth century has seen two major contributors to Christian theology emerge in Japan: Kazoh Kitamori and Kosuke Koyama, who has been described as a leading contributor to global Christianity.

The root of the Japanese word for Christianity, Kirisuto-kyō (キリスト教) comes from the Japanese katakana transcription of the word Christ (キリスト) and 教 (kyō, suffix for "doctrine").

While individual Christians may have visited Japan earlier, organized Christianity first reached Japan in 1549 with the arrival of the Portuguese. The local Japanese people initially assumed that the Portuguese were from India and that Christianity was a new "Indian faith". These mistaken assumptions were due to the Indian city of Goa being a central base for the Portuguese East India Company and also due to a significant portion of the crew on Portuguese ships being Indian Christians. Later on, the Roman Catholic missionary activities were exclusively performed by Portuguese-sponsored Jesuits and Spanish-sponsored mendicant orders, such as the Franciscans and Dominicans. Francisco Xavier (a Catholic Saint), Cosme de Torres (a Jesuit priest), and John Fernandez were the first who arrived in Kagoshima with hopes to bring Christianity and Catholicism to Japan. Catholicism was subsequently repressed in several parts of the country, and Christianity was legally banned throughout Japan during the Edo period. It continued to be practised In secret by some aristocrats, known as Kakure Kirishitan (Hidden Christians), who would often conceal Christian iconography within closed shrines, lanterns or inconspicuous parts of buildings. For example, Himeji Castle has a Christian cross on one of its 17th-century roof tiles, in place of a mon, indicating that one of its occupants was a secret Christian.

The shogunate and imperial government at first supported the Catholic mission and the missionaries, thinking that they would reduce the power of the Buddhist monks, and help trade with Spain and Portugal. However, the Shogunate was also wary of colonialism, seeing that in the Philippines the Spanish had taken power after converting the population. The government increasingly saw Roman Catholicism as a threat, and started persecuting Christians. Christianity was banned and those Japanese who refused to abandon their faith were killed.

On February 5, 1597, twenty-six Christians—six European Franciscan missionaries, three Japanese Jesuits and seventeen Japanese laymen including three young boys—were executed by crucifixion in Nagasaki. These individuals were raised on crosses and then pierced through with spears.

Persecution continued sporadically, breaking out again in 1613 and 1630. On September 10, 1632, 55 Christians were martyred in Nagasaki in what became known as the Great Genna Martyrdom. At this time Roman Catholicism was officially outlawed. The Church remained without clergy and theological teaching disintegrated until the arrival of Western missionaries in the nineteenth century.

While there were many more martyrs, the first martyrs came to be especially revered, the most celebrated of which was Paul Miki. The Martyrs of Japan were canonized by the Roman Catholic Church on June 8, 1862 by Blessed Pius IX and are listed on the calendar as Sts. Paul Miki and his Companions, commemorated on February 6. Originally this feast day was listed as Sts. Peter Baptist and Twenty-Five Companions, Martyrs, and commemorated on February 5.

" provides detailed fictionalised accounts of the persecution of Christian communities and the suppression of the Church.

After Japan was reopened to foreign interaction in 1853, many Christian clergymen were sent from Catholic, Protestant, and Orthodox churches, though proselytism was still banned.

After the Meiji Restoration in 1871, freedom of religion was introduced, giving all Christian communities the right to legal existence and preaching. Since World War II the number of Japanese Christians has been slowly increasing.

In 1981, Pope John Paul II paid a visit to Japan, during which he met with Japanese people, the clergy, and Catholic lay people, held Holy Mass in the Korakuen Stadium (Tokyo), and visited the Peace Memorial Park in Hiroshima, the Hill of Martyrs in Nagasaki, town of the Immaculate founded by St. Maximilian Kolbe in Nagasaki, and other places.

There was a burst of growth of Christianity in the late 1800s when Japan re-opened its doors to the West. However, this was followed by renewed suspicion and rejection of Christian teaching. Protestant church growth slowed dramatically in the early 20th century under the influence of the military government during the Shōwa period.

The post-World War II years have seen increasing activity by Evangelicals, initially with American influence, and some growth occurred between 1945 and 1960.

St. Nicholas of Japan (baptized as Ivan Dmitrievich Kasatkin) brought Eastern Orthodoxy to Japan in the 19th century. In 1861 he was sent by the Russian Orthodox Church to Hakodate, Hokkaidō as a priest to a chapel of the Russian Consulate.. Though the contemporary Shogun's government prohibited the Japanese conversion to Christianity, soon some neighbors who frequently visited the chapel converted in 1864—Nikolai's first three converts in Japan. While they were his first converts in Japan, they were not the first Japanese to do so—some Japanese who had settled in Russia had converted to Orthodoxy.

Apart from brief trips, Nicholas stayed in Japan, even during the Russo-Japanese War (1904–1905), and spread Eastern Orthodoxy nationwide, being appointed as the first bishop of Japanese Orthodox Church. He moved his headquarter from Hakodate to Tokyo around 1863. In 1886 the Japanese Orthodox Church had over 10,000 baptized faithful. In 1891 Nicholas founded the Cathedral of Tokyo in Kanda district and spent the majority of the last half of his life there, hence Tokyo Resurrection Cathedral was nicknamed Nikorai-do by Kanda citizens.

St. Nicholas of Japan is also known for his own translation of New Testament and some other religious books (Lenten Triodion, Pentecostarion, Feast Services, Book of Psalms, Irmologion).

The early mission to establish the Japanese Orthodox Church depended on the Russian Orthodox Church, especially in financial matters. The war between Russia and Japan created a politically difficult situation for the church. After the Russian Revolution, the support and communications both spiritual and financial from the Russian Church were unexpected. The Japanese government had new suspicions about the Japanese Orthodox Church; in particular, that it was used as a cover for communist Russian espionage. The second bishop of Japan, Metropolitan Sergius (Tikhomirov), called Sergii by the Japanese, suffered severely from such governmental suspicion, and he was forced to resign his episcopacy. The Russian Church similarly suffered from Stalinist policy and had no ability to help the young church in Japan.

The Great Kanto Earthquake in 1923 did serious damage to the Japanese Orthodox Church. The headquarters, Nikorai-do, was destroyed and burnt, including the library, along with many valuable documents. Nikorai-do was rebuilt in 1929 thanks to contributions by the faithful which Metropolitan Sergius gathered, visiting them nationwide.

In 2005, the first Orthodox monastery (male) of Japanese Autonomous Orthodox Church was opened in Tokyo near Holy Resurrection Cathedral (Nikolai-do). The abbot of the monastery is hieromonk Gerasimus (Shevtsov), who came from Troitse-Sergiyeva Lavra.

As of 2007, the leader of Japanese Orthodox Church is Daniel (Nushiro), Metropolitan of all Japan and Archbishop of Tokyo, elevated to his seat in 2000. It is estimated that the Church has some 25,000 adherents today.
at 01:17