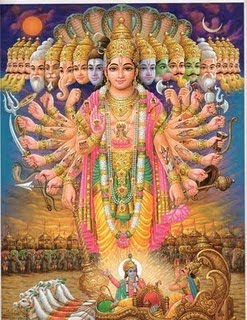 Monotheism in Hinduism is set in the views of the spiritual world are broad and range from monism, pantheism to panentheism, aptly termed as monistic theism and even open monotheism by some scholars, but are not polytheistic as outsiders perceive it to be. Hinduism has often been confused to be polytheistic because one leading denomination, Smartism, which follows the Advaita philosophy of absolute monism, and includes worship of all kinds of personal forms of God. Absolute monists see one unity with all personal forms of God as different aspects of one Supreme Being, like a single beam of light separated into colors by a prism. Thus Smartas consider all personal forms of God as equal including Devi, Vishnu, Siva, Ganesh and Skanda but generally limit the recognized forms to be six. Other denominations of Hinduism, don't adhere to the Smarta viewpoint, but are quite unlike Western perceptions of monotheism. Additionally, like Judeo-Christian traditions which believe in angels, Hindus also believe in less powerful entities, such as devas.

The Brahma Samhita 5.45 declares, Lord Vishnu is milk; Lord Shiva is yogurt. Other aspects of God are expansions or aspects of Vishnu or Shiva which is detailed in various Puranas. Vaishnavites, like other Hindus, have tolerance for other beliefs because Krishna, an avatar of Vishnu, said so in the Gita. Krishna says: "Whatever deity or form a devotee worships, I make his or her faith steady. However, their wishes are only granted by Me alone." (Gita 7:21-22) Another quote in the Gita states: "O Arjuna, even those devotees who worship other lesser deities (e.g., devas, for example) with faith, they also worship Me, but in an improper way because I am the Supreme Being. I alone am the enjoyer of all sacrificial services (Seva, Yajna) and Lord of the universe." (Gita 9:23).

Krishna-centered theology refers to Krishna with the title Svayam Bhagavan, meaning 'Lord Himself' and it is used exclusively to designate Krishna as the Supreme Lord. Certain other traditions of Hinduism consider Krishna to be the source of all incarnations, and the source of Vishnu himself or to be the same as Narayana. The term is seldomly used to refer to other forms of Krishna and/or Vishnu within the context of certain religious texts such as the Bhagavata Purana.

Though Krishna is recognized as Svayam Bhagavan by many, he is also perceived and understood from an eclectic assortment of perspectives and viewpoints. When Krishna is recognized to be Svayam Bhagavan, it can be understood that this is the belief of Gaudiya Vaishnavism, the Vallabha Sampradaya, and the Nimbarka Sampradaya, where Krishna is accepted to be the source of all other avatars, and the source of Vishnu himself. This belief is drawn primarily from the famous statement of the Bhagavatam(1.3.28):

All of the descents and incarnations are either plenary portions or portions of the plenary portions of the Lord, but Lord Śrī Kṛṣṇa is the original Personality of Godhead.
Vaishnavism is one of the earliest implicit manifestations of monotheism in the traditions of Vedas. Svayam bhagavan is a Sanskrit term for the original deity of the Supreme God worshiped across many traditions of the Vaisnavism as the source of all, the monotheistic absolute Deity. Within Hinduism, Krishna is worshiped from a variety of perspectives. However it must be noted that the Svayam bhagavan concept refers to the Supreme Being of the Orthodox Gaudiya Vaishnavism, the Vallabha Sampradaya and the Nimbarka Sampradaya, where Krishna is worshiped as the source of all other avatars (including Vishnu). A distinguishing feature of the Vaisnava teachings is that God, Krishna or Vishnu, is a real person and His variegated creation is also real.

Krishna worshiped in Vaisnava religion as the Supreme came into being as soon as all creatures came into existence. Brahma was the first Vaisnava. In Gaudiya Vaishnavism, Shiva Mahadeva is also a Vaisnava; in Shaivism, by contrast, Shiva is the supreme God. The ancient Prajapaties are all Vaisnavas. Narada who is the born child of Brahma, is a Vaisnava. Thus pure monotheistic Vaisnava religion began with the beginning of history. In the recent times man arrived once again at the instinctive monotheism of the Aryans and Vaisnavas.

A different viewpoint, opposing this theological concept is the concept of Krishna as an avatara of Narayana or Vishnu. It should be however noted that although its is usual to speak of Vishnu as the source of the avataras, this is only one of the names of god of Vaishnavism, who is also known as Narayana, Vasudeva and Krishna and behind each of those names there is a divine figure with attributed supremacy in Vaishnavism. The theological interpretation of svayam bhagavān differs with each tradition and the translated from the Sanskrit language, the term literary means "Bhagavan Himself" or "directly Bhagavan". Gaudiya Vaishnava tradition often translates it within its perspective as primeval Lord or original Personality of Godhead, but also considers the terms such as Supreme Personality of Godhead and Supreme God as an equivalent to the term Svayam Bhagavan, and may also choose to apply these terms to Vishnu, Narayana and many of their associated avatars. Others have translated it simply as "the Lord Himself". Followers of Vishnu-centered sampradayas of Vaishnavism rarely address this term, but believe that it refers to their belief that Krishna is among the highest and fullest of all avatars and is considered to be the "paripurna avatara", complete in all respects and the same as the original.

The prime supporters of the Krishna-centered theology, Gaudiya Vaishnavas and followers of the Vallabha Sampradaya Nimbarka Sampradaya, use the Gopala Tapani Upanishad, Vedanta Sutras and other Hindu scriptures such as The Bhagavata Purana

and The Brahma Vaivarta Purana

, among others, to support their view that Krishna is indeed the Svayam Bhagavan. This belief was summarized by the 16th century author Jiva Goswami in some of his works, such as Krishna-sandarbha. While Krishna himself if mentioned in one of the earliest texts of Vedic literature - The Rig-Veda

In the sixth book of the Hindu epic Mahābhārata, the Bhishma Parva (better known as the Bhagavad Gita)

, Krishna offers numerous quotations that reaffirm the belief that he himself is the Svayam Bhagavan. Verse 7.7 of the Bhagavad Gita, is often used to support the opinion that Krishna himself is the Svayam Bhagavan, and that no impersonal form of Brahman supersedes his existence, as it is an common view that Bhagavad Gita was propounding Krishna-theism before first major proponents of monism of the Smarta school.
at 01:16