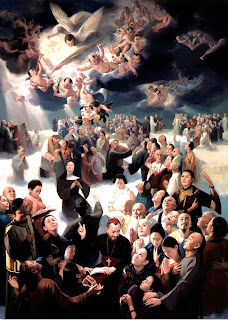 Christianity in China (called 基督教, or Christ Religion) is a growing minority religion that comprises Protestants, Catholics, and a small number of Orthodox Christians. Although its lineage in China is not as ancient as beliefs such as Confucianism or Taoism, or comparable to missionary faiths such as Mahayana Buddhism, Christianity has developed in China since at least the 7th century and has demonstrated increasing influence for over 200 years. Growth has been more significant since the loosening of restrictions on religion after the 1970s within the People's Republic of China. Religious practices are still often tightly controlled by government authorities. Chinese over age 18 in the PRC are permitted to be involved with officially sanctioned Christian meetings through the "Three-Self Patriotic Movement" or the "Chinese Catholic Patriotic Association". Many Chinese Christians also meet in "unregistered" house church meetings. Reports of sporadic persecution against such Christians in Mainland China have caused concern among outside observers.

There are a small number of adherents of Russian Orthodoxy in northern China, predominantly in Harbin. The first mission was undertaken by Russians in the 17th century. Orthodox Christianity is also practiced by the small Russian ethnic minority in China. The Church operates relatively freely in Hong Kong (where the Ecumenical Patriarch has sent a Metropolitan Archbishop Nikitas and The Russian Orthodox Parish of St Peter and St Paul resumed its operation) and Taiwan (where Archimandrite Jonah George Mourtos leads a mission church).

The subject of China's Christian population is controversial. The government of the People's Republic of China census enumerated 4 million Roman Catholics and 10 million ‎Protestants. However, independent estimates have ranged from 40 million, to 100 million, to 130 million Christians. According to recent studies, there are roughly 54 million Christians in China, of which 39 million are Protestants and 14 million are Roman Catholics as the most common figure among others.

Chinese Martyrs is the name given to a number of members of the Protestant Church, Roman Catholic Church, and the Eastern Orthodox Church who were killed in China during the 19th and early 20th centuries. They are celebrated as martyrs by their respective Churches. Most were Chinese laity, but others were missionaries from various other countries; many of them died during the Boxer Rebellion.

The Eastern Orthodox Church recognizes 222 Albazinians who died during the Boxer Rebellion as "Holy Martyrs of China". They were mostly members of the Chinese Orthodox Church, which had been founded by Russian Orthodox missionaries in the 17th century and maintained close relations with them, especially in the large Russian community in Harbin. They are called new-martyrs, as they died under a modern regime. The first of these martyrs was Metrophanes Chi Sung.

The Martyr Saints of China, or Augustine Zhao Rong and his 119 companions, are saints of the Roman Catholic Church. The 87 Chinese Catholics and 33 Western missionaries, from the mid-17th century to 1930, were martyred because of their ministry and, in some cases, for their refusal to apostasize. Many died in the Boxer Rebellion, in which xenophobic peasants slaughtered 30,000 Chinese converts to Christianity along with missionaries and other foreigners. In the ordinary form they are remembered with an optional memorial on 9 July.

The "China Martyrs of 1900" is a term used by the Protestant Christian church to refer to its members who were killed during the 1900 Boxer Rebellion, when targeted attacks took place across mainland China against Christians and foreigners.

A total of 182 Protestant missionaries and 500 Chinese Protestants were known to have been killed, but the numbers of native Chinese involved may have been higher. The China Inland Mission, where 58 adults and 21 children were killed, had the highest losses of any agency.

However, in 1901, when the allied nations were demanding compensation from the Chinese government, Hudson Taylor, a British Protestant Christian missionary to China and founder of the China Inland Mission (CIM) (now OMF International), refused to accept payment for loss of property or life in order to demonstrate the meekness of Christ to the Chinese.
at 00:01