The Tao of the Ginkgo Tree 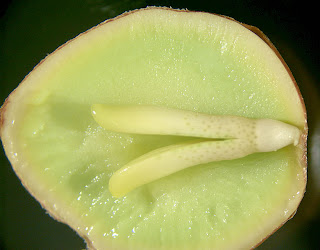 Ginkgo (Ginkgo biloba; in Chinese and Japanese 銀杏, pinyin romanization: yín xìng, Hepburn romanization: ichō or ginnan), also spelled gingko, also known as the Maidenhair Tree after Adiantum, is a unique species of tree with no close living relatives. The ginkgo is classified in its own division, the Ginkgophyta, comprising the single class Ginkgoopsida, order Ginkgoales, family Ginkgoaceae, genus Ginkgo and is the only extant species within this group. It is one of the best-known examples of a living fossil, because Ginkgoales other than G. biloba are not known from the fossil record after the Pliocene.

For centuries it was thought to be extinct in the wild, but is now known to grow in at least two small areas in Zhejiang province in Eastern China, in the Tian Mu Shan Reserve. However, recent studies indicate high genetic uniformity among ginkgo trees from these areas, arguing against a natural origin of these populations and suggesting that the ginkgo trees in these areas may have been planted and preserved by Chinese monks over a period of about 1000 years. Whether native ginkgo populations still exist has not been demonstrated unequivocally.

Ginkgo has long been cultivated in China; some planted trees at temples are believed to be over 1,500 years old. The first record of Europeans encountering it is in 1690 in Japanese temple gardens, where the tree was seen by the German botanist Engelbert Kaempfer. Because of its status in Buddhism and Confucianism, the Ginkgo is also widely planted in Korea and parts of Japan; in both areas, some naturalization has occurred, with Ginkgos seeding into natural forests.

Ginkgos adapt well to the urban environment, tolerating pollution and confined soil spaces. They rarely suffer disease problems, even in urban conditions, and are attacked by few insects. For this reason, and for their general beauty, ginkgos are excellent urban and shade trees, and are widely planted along many streets.

Ginkgos are also popular subjects for growing as penjing and bonsai; they can be kept artificially small and tended over centuries. Furthermore, the trees are easy to propagate from seed.

Extreme examples of the Ginkgo's tenacity may be seen in Hiroshima, Japan, where six trees growing between 1–2 km from the 1945 atom bomb explosion were among the few living things in the area to survive the blast (photos and details). While almost all other plants (and animals) in the area were destroyed, the ginkgos, though charred, survived and were soon healthy again. The trees are alive to this day.

The ginkgo leaf is the symbol of the Urasenke school of Japanese tea ceremony. The tree is the national tree of China.

The nut-like gametophytes inside the seeds are particularly esteemed in Asia, and are a traditional Chinese food. Ginkgo nuts are used in congee, and are often served at special occasions such as weddings and the Chinese New Year (as part of the vegetarian dish called Buddha's delight). In Chinese culture, they are believed to have health benefits; some also consider them to have aphrodisiac qualities. Japanese cooks add Ginkgo seeds (called ginnan) to dishes such as chawanmushi, and cooked seeds are often eaten along with other dishes.

Ginkgo has many alleged nootropic properties, and is mainly used as memory and concentration enhancer, and anti-vertigo agent. Ginkgo has been proposed as a treatment for Alzheimer's disease on the basis of positive preclinical results in mice. Ginkgo extract may have three effects on the human body: improvement in blood flow (including microcirculation in small capillaries) to most tissues and organs; protection against oxidative cell damage from free radicals; and blockage of many of the effects of platelet-activating factor (platelet aggregation, blood clotting) that have been related to the development of a number of cardiovascular, renal, respiratory and central nervous system disorders. Ginkgo can be used for intermittent claudication. Some studies suggest a link between ginkgo and the easing of the symptoms of tinnitus. Preliminary studies suggest that Ginkgo may be of benefit in multiple sclerosis, showing modest improvements in cognition and fatigue without increasing rates of serious adverse events in this population. A study conducted in 2003 by the Department of Dermatology, Postgraduate Institute of Medical Education and Research in Chandigarh, India concluded that Ginkgo is an effective treatment for arresting the development of vitiligo.
at 02:18