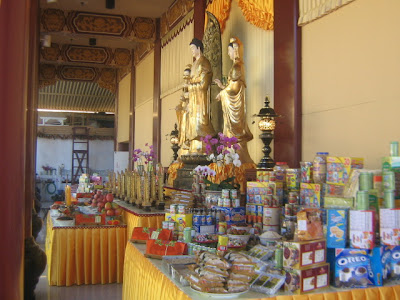 To Buddhists, the seventh lunar month is a month of joy. This is because the fifteen day of the seventh month is the Buddha's joyful day and the day of rejoice for monks.

The origins of the Buddha's joyful day can be found in the scriptures. When the Buddha was alive, his disciples meditated in the forests of India during the rainy season of summer. Three months later, on the fifteen day of the seventh month, they would emerge from the forests to celebrate the completion of their meditation and report their progress to the Buddha. In the Ullambana Sutra, the Buddha instructs his disciple Maudgalyāyana on how to obtain liberation for his mother, who had been reborn into a lower realm, by making food offerings to the sangha on the fifteenth day of the seventh month. Because the number of monks who attained enlightenment during that period was high, the Buddha was very pleased.

Mahāmaudgalyāyana saves his mother from hell

The Buddhist origins of the festival can be traced back to a story that originally came from India, but later took on culturally Chinese overtones. In the Ullambana Sutra, there is a descriptive account of a brahmin youth who became a Buddhist monk. He became one of the Buddha's chief disciples. His name was Mahāmaudgalyāyana.

After he attained the title of arhat, he thought of his father and mother, and wondered what happened to them. He used his clairvoyance to see where they were reborn and found his father in the heavenly realms i.e the realm of the gods.

However, his mother had been reborn in a lower realm, known as the Realm of Hungry Ghosts. His mother took on the form of a hungry ghost--- so called because it could not eat due to its thin & fragile throat in which no food could pass through, yet it was always hungry because it had a fat belly. His mother had been greedy with the money he left her. He had instructed her to kindly host any Buddhist monks that ever came her way, but instead she withheld her kindness and her money. It was for this reason she was reborn in the realm of hungry ghosts.

Mahāmaudgalyāyana eased his mother's suffering by receiving the instructions of feeding pretas from Gautama Buddha. Buddha instructed Mahāmaudgalyāyana to place food on a clean plate, recite the food transformation mantra seven times, snap his fingers then tip the food on clean ground. By doing so, the preta's hunger was relieved and through these merits, his mother was born as a dog; a wretched fate, but one that was certainly far better than that of a hungry ghost.

Due to Confucian influence, the offering became directed towards ancestors rather than the Sangha and ancestor worship has replaced the simple ritual of relieving the hunger of pretas. However some Buddhist temples still continue the ancient practice of donating to the Sangha.

This festival is the chance for pardoning guilty ghosts which are homeless and not be taken care of. People worship ghosts and liberate animals, such as birds or fish.

Influenced by Buddhism, this holiday is also the Vu Lan festival，the Vietnamese transliteration for Ullambana. The festival is also considered Mother's Day. People with living mothers would be thankful, while people with dead mothers would pray for their souls.

O-bon, or simply Bon, is the Japanese version of the Ghost Festival. It has since been transformed over time into a family reunion holiday during which people from the big cities return to their home towns and visit and clean their ancestors' graves.

Traditionally including a dance festival, it has existed in Japan for more than 500 years. It is held from 13th of July to the 16th ("Welcoming Obon" and "Farewell Obon" respectively) in the eastern part of Japan (Kantō), and in August in the western part (Kansai).
at 09:38