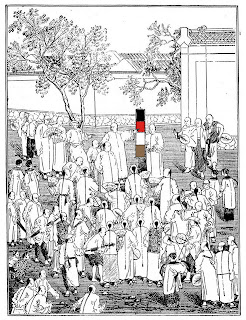 The Chinese Rites controversy was a dispute within the Catholic Church from the 1630s to the early 18th century about whether Chinese folk religion rites and offerings to the emperor constituted idolatry or not. Pope Clement XI decided in favor of the Dominicans (who argued that Chinese folk religion and offerings to the emperor were incompatible with Catholicism), which greatly reduced Catholic missionary activity in China.

It was related to larger controversies between the Dominicans and Jesuits over the adoption of local practices of other countries, such as the ascetic brahmin (Hindu) practices of India.

The Society of Jesus (Jesuits) was successful in penetrating China and serving at the Imperial court. They impressed the Chinese with their knowledge of European astronomy and mechanics, and in fact ran the Imperial Observatory. Their accurate methods allowed the Emperor to successfully predict eclipses, one of his ritual duties. Other Jesuits functioned as court painters. The Jesuits in turn were impressed by the Chinese Confucian elite, and adapted to that lifestyle.

The primary goal of the Jesuits was to spread Catholicism, but here they had a problem. The Chinese elite were attached to Confucianism, while Buddhism and Taoism were mostly practiced by the common people and lower aristocracy of this period. Despite this, all three provided the framework of both state and home life. Part of Confucian and Taoist practices involved veneration of the ancestors. The Jesuits tried to argue, in Rome, that these "Chinese Rites" were social, not religious, ceremonies, and that converts should be allowed to continue to participate. (The debate was not, as is sometimes thought, about whether the liturgy could be in Chinese rather than Latin.) The Jesuits argued that Chinese folk religion and offerings to the emperor and departed ancestors were civil in nature and therefore not incompatible with Catholicism, while the Dominicans argued the reverse.

In 1939, under the pontificate of Pius XII, the Congregation for the Evangelization of Peoples relaxed the certain aspects of Clemens XI's and Benedict XIV's decrees: