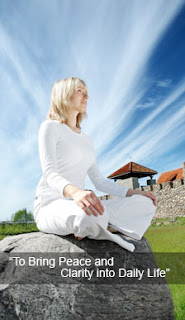 "The sufferings which overtake beings are the fruit of their desires.", Gautama Buddha, 563?-483? B.C.

"When you fast, anoint your head and wash your face so that you do not appear to others to be fasting, but to your Father, who is in the secret place; and your Father, who sees in secret, will reward you openly.", Jesus Christ, c. 8-4 B.C.-29? A.D.

"The biggest problem facing the world today is not people dying in the streets of Calcutta, and not inflation, but spiritual deprivation... this feeling of emptiness associated with feeling separate from God, and from all our sisters and brothers on planet Earth.", Mother Teresa, 1979 Nobel Peace laureate

"In past centuries, there have been many learned teachers who have laid down various paths to the realization of Truth. Among them, Lord Buddha is one, and my study of Buddhism has led me to form the opinion that, despite the differences in the names and forms used by the various religions, the ultimate truth to which they point is the same.", His Holiness the Dalai Lama, 1989 Nobel Peace laureate

"I think that we have now reached a stage of religious maturity where it may be possible for someone to remain perfectly faithful to a Christian and Western monastic commitment and yet learn in depth from, say, a Buddhist or Hindu discipline or experience." , Fr. Thomas Merton, one of the two greatest Christian theologians of the 20th Century (along with Paul Tillich), from The Asian Journal of Thomas Merton

Four Points must preface this discussion. One, sacred teachings are, and always have been, separate from human commercial interactions (despite the fact that you and I have chosen to meet here on Earth's World Wide Web, the presumptive heart of our emerging Knowledge Society's commercial world). Two, fasting is obviously contraindicated for some. Three, there are many pathways to one's spiritual unfoldment, of which fasting is merely one which all great religions have used, historically, albeit an incremental aspect. And four, presently on our Earth, this long-term, global religious war resulting from extreme fundamentalism on both sides, has ignited a conflict that is just beginning between good religion and bad religion, that will last a generation, and that is pushing fundamentalists closer to the use of weapons of mass destruction, with time running out.

As His Holiness the Dalai Lama noted in Bangalor, India, in December of 2004: "Humanity has made religion a source of conflict. In order to serve humanity, which is our common responsibility, we should have closer relationships based on mutual understanding. All religious thoughts carry the same message with different philosophical approaches, yet even if we believe ourselves religious, at very critical times, we allow power and money to take precedence. The time has come to concentrate on spiritual studies, feeling inner values like compassion and warm-heartedness. I call these secular ethics."

At this critical juncture in human evolution, those who truly are interested in scientific, therapeutic fasting's superb spiritual benefits, from all major religious creeds and philosophies, have been asking me for 35 years about these potential benefits, as well as about spiritual teachers who have fasted. Thus, as one who, like both Pope John XXIII and His Holiness the XIVth Dalai Lama, believes that individuals have to be seen first as human beings, and only then as members of religious groups, my answers here are respectfully provided for you and all our sisters and brothers, in hopes you can make a more intelligent decision about whether or not you wish to use scientific fasting to increase your own faith, as well as to accomplish great things in the lives of others.

As Fr. Thomas Ryan, a catholic priest and certified Kripalu yoga teacher who coordinates ecumenical and inter-religious relations for the Paulist community in the U.S. and Canada, has written: "Fasting as a religious act increases our sensitivity to that mystery always and everywhere present to us... It is an invitation to awareness, a call to compassion for the needy, a cry of distress, and a song of joy. It is a discipline of self-restraint, a ritual of purification, and a sanctuary for offerings of atonement. It is a wellspring for the spiritually dry, a compass for the spiritually lost, and inner nourishment for the spiritually hungry."
at 21:39