Christianity in the Crucible of Chan Conversations 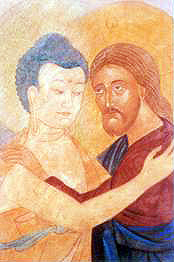 The fact of having Christians as students and seeing them advance in their Zen practice could not help but raise questions in Koun Yamada’s mind. For a long time he restrained himself from asking these questions lest he confuse his Christian students, but finally, he addressed them to two of his advanced students, Hugo Lassalle and Ruben Habito: "First, why did you not just continue meditational practices following your own Christian tradition instead of coming to Zen? Was there something lacking in Christianity that led you to seek something in Zen, or did you have some dissatisfaction with Christianity that led you to Zen? And also a question to Christians who have had the Zen experience through the mu koan: How would you express this experience in your own Christian terms? And a third question: For those who have had the mu experience there is given the koan about the origin (kongen) of mu. How would you answer a question about the origin of God?"

Fr. Lassalle answered the first question by explaining that his initial motivation to practice Zen was his desire to enter more deeply into the inner life of the Japanese people, and Zen had enabled him to understand the Christian mystical tradition better.

Ruben Habito’s answers went deeper. The practice of Zen had been preceded by his struggle to find meaning in life, and to face the question of God, both before and after he had joined the Jesuits. This search reached a certain culmination in his first breakthrough in Zen:

"… For me the mu-experience, triggered by my working on the koan of Joshu’s dog, literally shook me inside out, and kept me laughing and even crying for about three days, as I remember. People around me must have thought I was going crazy then. I can only say at this point that the experience enabled me to see the truth, the forcefulness, the real reality of what Paul wanted to express in Galatians 2:20 - "It is no longer I that live, but Christ in me!"

"So to answer Yamada Roshi’s first and second question in the same breath, I came to Zen in the search for my True Self, and the mu-experience was its discovery, the discovery of my total nothingness. And yet this total nothingness is also total everythingness, the discovery of an exhilarating world of the fullness of grace surpassing all expectations, active even before the beginning of the world (Eph. 1:1-11), and one can only exclaim again with Paul, Who can fathom "the breadth and length and height and depth," and Who can "know the love of Christ which surpasses all knowledge"? (Eph. 3:18-19).

"And if you ask the origin of all this, I can only admit I don’t know. One can only humbly receive, from moment to moment, the fullness of grace."

It is interesting to note how seamless this integration of Zen is with his prior Christian training, as shown by the natural way in which he has recourse to the Scriptures and the use of the term grace. In the face of such dynamic experience, our question of the relationship between contemplation and enlightenment, still less metaphysics, could easily appear to be the ingrained theological resistance of a Christian mentality dominated by concepts and bereft of experience. Yet, is it possible to see in this passage hints of a unification of Zen and Christianity in which the spiritual practices of both would be identified? Or is there something more nuanced or subtle going on here where it would be possible to say that contemplation and enlightenment are not different, but they are not the same – not one, not two?

In a videotaped interview he describes how he became the first Catholic religious in the circle of Yamada’s students to attain kensho or enlightenment in November, 1971. Reflecting on whether the Christian experience of contemplation is the same as enlightenment, he tells us that in reading the profound insights to be found in the letters of St. Paul, he found that they "pointed to the same dimension

It is important to note that the answer that Ruben Habito gives to Yamada, and probably Yamada’s questions, themselves, are cast in the pattern of the classical Zen dialogue. In fact, Habito’s answer to Yamada was in the form of the demonstration of a koan, and that was probably what Yamada was asking for. But is it possible to ask these questions from another perspective from the point of view of our pilgrimage through East-West dialogue in order to concretely situate our question?

Why did Christians come to Zen? Did they feel a dissatisfaction with Christianity? It seems that this was often the case, and why wouldn’t it be? The Christian mystical tradition had entered into a long, dark night at the end of the 17th century that it was just beginning to recover from at the time of the Second Vatican Council. And the Christian metaphysical tradition of St. Thomas had been handed on in a rather lifeless, conceptual way rather than in the form of an initiation into the mystery of being. As a consequence even candidates for the priesthood were poorly instructed in it. Instead, they were often force-fed an over-conceptualized philosophy and theology – unfortunately, in the name of Thomas Aquinas – that did little to nourish them philosophically and theologically, and still less spiritually. Further, at a certain critical juncture of the life of prayer, which could be called the dark night of the senses in the wide sense of the term, ordinary discursive forms of prayer begin to fail. This failure makes itself felt in the diminishment of consolation and gratification that prayer used to bring, and practical help in resolving this crisis was lacking. Zen, therefore, represented, and still represents, an attractive choice in the face of these deficiencies in Christian philosophy, theology and spirituality. Zen aims at direct experience, and so is a powerful antidote to overconceptualization.

How can we express the new experience in Christian terms? We can read this question in different ways. One would be to answer it as a koan, as Habito did, and that is probably the way it was meant by Yamada. But there is another way to look at it. We could rephrase the question in terms of what the Christian mystical and metaphysical tradition had to say about the mu experience, or the nature of enlightenment. Unfortunately, it appears that many Christian Zen students, to one degree or another, are unacquainted with or estranged from these mystical and metaphysical traditions. Their overconceptual presentation has caused them to be held in contempt. Christian Zen students, having tasted the new freedom of Zen experience, can hardly be expected to look kindly on these old conceptual prisons, but the result is that they are unable to answer Yamada’s questions in a distinctively Christian way. They are unable to believe that Christian mysticism and metaphysics have the resources to tackle such a difficult issue. Thus, they can tacitly act as if Zen meditation and the Christian life of prayer are the same thing, or they can keep them in separate compartments, but rarely can they find the enthusiasm for dealing with Yamada’s questions from a distinctively Christian point of view.

It is much the same case with Yamada’s third question about the origin of God. A question about the origin and nature of God is central to any Buddhist-Christian dialogue. Later in this same interview Yamada remarks: "Recently one of my disciples, who is a Benedictine nun, presented to me a book written by a German Catholic priest, subtitled Foundations for Buddhist-Christian Dialogue. It was written by Hans Waldenfels, S.J., and the title of the English translation is Absolute Nothingness. I was very much impressed with the contents of the book, and it led me to see that what you Christians call God may not be too different from what we are concerned with in Zen. Just the other day I had a meeting with four Catholic priests who have finished the Zen koan training, and during our free discussion I asked them about this, and all of them seemed to agree on the common ground of what you call God and what we are concerned with in Zen. Fr. Lassalle came later, and he also shared the same view."

In a very profound way it is possible to say that Zen is about God, or more precisely, it is, indeed, a mystical experience of God, and this is saying a great deal, for then it becomes clear why Christians can and have embraced Zen so deeply. It is rather ironic and sad that Christians who thirst for God fail to find God amidst constant talk about God in Christian theology, and constant prayer exercises and go on to find a certain assuagement of that thirst for God in Zen Buddhism which refuses to talk about God. But as important as it is to recognize that Zen enlightenment can be an experience of God from a Christian perspective, this does not lead to the conclusion that Zen meditation is the same as the Christian life of prayer, or that their goals are the same. The same God can be approached from different directions and under different formalities.
at 12:00

I was recently referred to (a review of) a book titled Beside Still Waters: Jews, Christians, and the Way of the Buddha, which from what I read in the review looks at how Buddhism has helped people from a Judeo-Christian background to actually have a greater appreciation *of* that background. I also couldn't help but notice how many aspects of what Fr. Thomas Keating discusses in a recent book called Manifesting God sounds like what one would here in a discussion of Buddhism. I wasn't surprised to find this to be the case, but it was still interesting to see it.