Enlightenment, or Oneness with the Kingdom Within 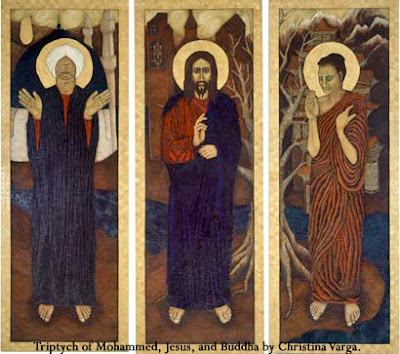 Siddhartha Gautama, at 36, fasted 49 days under that now-famous tree in Bodhgaya, India, achieving Enlightenment, or the Awakened state, during the process. "Buddha" is Sanskrit for "Awake", a state free from all obstructions to knowledge and to disturbing emotions... a state in which one's mind is fully evolved, capable of seeing the nature of things as they truly are, as well as perceiving all that exists, past, present and future. As Academy Award winning director Bernardo Bertolucci scripturally portrayed in his excellent film, Little Buddha, Prince Siddhartha, like the Chinese founder of Taoism before Him, Lao Tzu (604? B.C.-?), plus the Christian Messiah who would follow, was born by "miraculous" birth (from Queen Maya Gautama's side, without causing her pain or injury), standing immediately in full awareness, walking seven steps in surveying the four cardinal directions (symbolizing what would become, 36 years later, the Buddha's first teaching on the Four Noble Truths), and proclaiming: "For Enlightenment, I was born, and for the good of all that lives."

Thus, the achievement of Enlightenment by this one all Buddhists call "Lord," was a teaching of what is possible for all sentient beings, Oneness with this Universal Creative Force which Buddhist and Jains call "Omniscient Mind"; Christians and Jews, "God"; Muslims, "Allah"; Hindus, "Brahma"; native Americans, "Great Spirit", etc... .all equally valid metaphors for this mysterious, formless, genderless, supreme and eternal essence of the Universe, of which we're all equal parts, unlimited by anyone's merely human concepts... what Dr. Einstein acknowledged in concluding: "Everyone who is seriously interested in the pursuit of science becomes convinced that a Spirit is manifest in the law of the Universe."

Christ, about whom our current Bible reveals nothing concerning His most formative years, 13 to 30, when He emerged from obscurity, asked John to baptize Him, fasted 40 days, and then began His ministry by proclaiming: "The Father and I are One!", inferred that we can be, also, by seeking the "Kingdom within" (all beings, equally). Interestingly, the Buddhist Canon, which is at least 16 times as voluminous as the Christian Bible (as Shakyamuni Buddha taught for 45 years; Christ, for only three), lists all 1,000 Buddhas who'll appear in this particular "world age," including the years of their births, plus the names of the family to which each will be born. Shakyamuni, the fourth, was preceded by Kashyapa Buddha, just as He'll be followed by Maitreya Buddha, due in 2460 years.

Just as Christian Scriptures teach that Christ miraculously reappeared three days after His apparent death on the cross, inviting a doubting Thomas to check out His nail wounds, Buddhist Scriptures teach that Shakyamuni Buddha, whose mother died shortly after His birth, left His body for three months, ascending to Heaven (Tushita in Sanskrit) where He paid her His respect and gratitude by teaching there, before returning to Earth to teach for nearly half a century. Lord Buddha, whose message of love, compassion, equality and nonviolence was for all sentient beings, without exception, also similarly performed many miraculous activities throughout the 45 years of His own teachings, particularly at Shravasti, where He spent each rainy season in retreat for some 25 years. Eventually, at 81, He announced the date of His mahaparinirvana (Sanskrit for the passing away of a Buddha, into Heaven, Tushita, where the future Buddha, Maitreya, is presently residing).

Those with the open-minded intellectual curiosity and cognitive energy to investigate just what Christ MAY have been up to during the 17 most formative years of his life so inexplicably missing from our current Bible, may wish to use this mightiest research tool ever invented to school yourself, perhaps beginning by Googling "Christ's Lost Years," or checking out Amazon.com for "The Lost Years of Jesus," where you'll be introduced to Nicolas Notovitch's The Unknown Life of Christ; Elizabeth Clare Prophet's The Lost Years of Jesus: Documentary Evidence of Jesus's 17-Year Journey To The East; Charles F. Potter's Lost Years of Jesus Revealed; Shirley West's The Lost Years of Jesus (Spirit of Truth); John P. Brown's The Lost Years of Jesus, and Alex Jack's A Visit to the Land of the Gods: Searching For the Modern Philosopher's Stone, Tracing Jesus's Lost Years In the East, and Exploring the Common Roots of the Jews and the Japanese.

You don't have to be a card-carrying Christian theologian to at least read the efforts of those who've spent far more time and energy than you researching this 17-year black hole in our Bible. For example, in Elizabeth Claire Prophet's The Lost Years of Jesus, she presents original translations of ancient documents, together with the testimony of four eyewitnesses who examined those secret scrolls revealing that Jesus spent 17 years in the Orient two millennia ago, where He was known and loved throughout the East as Saint Issa. She also covers the international controversy which arose when these ancient manuscripts were first discovered in 1887 in Tibet, and how so-called experts "proved" they did not exist, only to have them rediscovered in the 20th century by Professor Nicholas Roerich, Mme. Elisabeth Caspari, and originally-skeptical Swami Abhedananda.

These chronicles, oral traditions and legends of what Jesus reportedly did and said in India, Nepal, Ladakh and Tibet, prior to his Palestinian mission, are fascinating and well documented. Included are the personal accounts of those who actually trekked the Himalayas to bring us firsthand accounts of historic events long documented, concerning those 17 most formative and dynamic years of Christ's life.
at 00:07