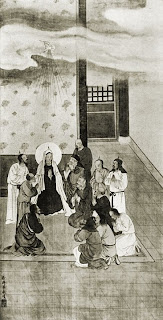 The government census enumerates 4 million Catholics and 10 million Protestants. However, independent estimates have ranged from 40 million, to 100 million, to 130 million Christians in January 2007 (out of a total population of at least 1.3 billion people).

In October 2007 two surveys were conducted to estimate the number of Christians in China. One poll was held by Protestant missionary Werner Burklin, the other one by Liu Zhongyu from East China Normal University in Shanghai. The surveys were conducted independently and during different periods, but they reached the same results. According to these studies, there are roughly 54 million Christians in China, of which 39 million are Protestants and 14 million are Catholics.

Christianity took root in a significant way during the Qing Dynasty, and although it has remained a minority religion in China, it has had significant historical impact. The Taiping Rebellion was influenced to some degree by Christian teachings, and the Boxer Rebellion was in part a reaction against Christianity in China. Christians in China established the first clinics and hospitals, provided the first training for nurses, opened the first modern schools, worked to abolish practices such as foot binding, and the unjust treatment of maidservants, as well as launching charitable work and distributing food to the poor. They also opposed the opium trade and brought treatment to many who were addicted. Some of the early leaders of the Chinese Republic, such as Sun Yat-sen were converts to Christianity and were influenced by its teachings.

As of 2007, indigenous Chinese Christianity is growing in contrast to Christian adherence in the West, where it is in decline in many cases. Nicholas D. Kristof, a columnist of the New York Times wrote on June 25, 2006, "Although China bans foreign missionaries and sometimes harasses and imprisons Christians, especially in rural areas, Christianity is booming in China." In 1800 there were 250,000 baptized Roman Catholics, but no known Protestant believers out of an estimated 362 million Chinese. By 1949, out of an estimated population of 450 million, there were just over 500,000 baptized Protestant Christians. Anonymous internet columnist Spengler commented in 2007 that Christianity "will have become a Sino-centric religion two generations from now."

Traditional Christian thought suggested that St. Thomas, known as "the Apostle of India" or possibly St. Bartholomew was the first to spread the Christian gospel in China.

There are various terms used for God in the Chinese language, the most prevalent being Shangdi (上帝, literally, "Sovereign King Above"), used commonly by Protestants and also by non-Christians, and Tianzhu (天主, literally, Lord of Heaven), which is most commonly favoured by Catholics.

While Christianity is referred to as 基督教 (Christ religion), the modern Chinese language typically divides Christians into three groups: believers of Protestantism Xin jiaotu (新教徒, literally "new religion followers"), believers of Catholicism Tianzhu jiaotu (天主教徒, Lord of Heaven religion followers), and believers of Orthodox Dongzheng jiaotu (東正教徒, Eastern Orthodox religion followers, but more correctly "zhengjiaotu" 正教徒, because there is only one Chinese term for both Eastern and Oriental which is "dong" 東 and simply means the east. The latter term is more correct also because Eastern Orthodox churches are not in communion with and thus differ from the Oriental Orthodox churches.)
at 09:32