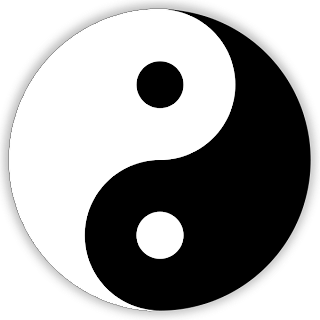 In Chinese philosophy the yin and yang (simplified Chinese: 阴阳; traditional Chinese: 陰陽; pinyin: yīnyáng) are generalized descriptions of the antitheses or mutual correlations in human perceptions of phenomena in the natural world, combining to create a unity of opposites in the theory of the Taiji. The term liang yi (simplified Chinese: 两仪; traditional Chinese: 兩儀; pinyin: liǎngyí, lit. "two mutually correlated opposites") has a similar meaning.

The dual concepts of yin and yang (or heaven and earth) describe two primal opposing but complementary principles or cosmic forces said to be found in all non-static objects and processes in the universe. This seemingly paradoxical concept is the cornerstone of most branches of Chinese philosophy, as well as traditional Chinese medicine.

Yin (dark) and yang (light) are descriptions of complementary opposites as well as absolutes. Any yin/yang duality can be viewed from another perspective. All forces in nature can be seen as existing in yin or yang states, and two produce constant movement/force of the universe.

As the universe is relative and interdependent, the determination of which thing is yin or yang depends on what is its complementary opposite - that is, the frame of reference. This yin-and-yang relativity concept forms the core in understanding of many Chinese philosophic classics as embodied in the Tao Te Ching.

The Taijitu (pictured at top of page; traditional Chinese: 太極圖; simplified Chinese: 太极图; pinyin: Taìjí tú; Wade-Giles: T'ai4 chi2 t'u2; literally "diagram of the supreme ultimate"), often referred to as yin-yang in English, is a well known symbol deriving from Chinese culture which represents the principle of yin and yang from Taoist and Neo-Confucian philosophy. The term Taijitu itself refers to any of several schematic diagrams representing these principles.

The taijitu represents an ancient Chinese understanding of how things work. The outer circle represents the entirety of perceivable phenomena, while the black and white shapes within the circle represent the interaction of two principles or aspects, called "yin" (black) and "yang" (white), which cause the phenomena to appear in their peculiar way. Each of them contains an element or seed of the other, and they cannot exist without each other. There are other ways that Chinese schools of thought graphically represented the principles of yin and yang, an older example being the solid and divided lines of the I Ching.

Wu Jianquan, a famous Chinese martial arts teacher, described the name of the martial art Taijiquan this way at the beginning of the 20th century:

"Various people have offered different explanations for the name Taijiquan. Some have said: 'In terms of self-cultivation, one must train from a state of movement towards a state of stillness. Taiji comes about through the balance of yin and yang. In terms of the art of attack and defense then, in the context of the changes of full and empty, one is constantly internally latent, not outwardly expressive, as if the yin and yang of Taiji have not yet divided apart.' Others say: 'Every movement of Taijiquan is based on circles, just like the shape of a Taijitu. Therefore, it is called Taijiquan.' Both explanations are quite reasonable, especially the second, which is more complete."

The image above showing yin-yang is a circle (presenting taijitu- the initial unity of universe) with two parts: white part presents yang and black part presents yin. Two parts pass through each other on a line because yin and yang are never separated, such as if people do not know what bad is, they do not know what good is. There is a small black round in white part and so is in black part; that presents the philosophy: "yang in yin, yin in yang" (for example: though water is fluid-yin, water is also hydraulic-yang); if yin is not in yang, yang is not yang and so (everything have two aspects). Neither white part nor black part is a semicircle because there is never absolute balance between yin and yang. There is always having a stronger aspect and a weaker aspect; that presents the philosophy: "Whenever yin is stronger, yang is weaker and so". If the circle is divided into two by any diameter, black or white colour never cover all of the area of a segment because universe is never in all yin or all yang.

On the opinion of stay, two parts are put together in a circle; that is unity. On the other hand, on the opinion of motion, two parts are contradict aspects, they fight and interchange each other; whenever the trend of yin increases, the trend of yang decreases and so. At the specific time when yin is extreme, yin starts to grow into yang and so (for example: day after night, night after day). The unity maintains universe and the contradiction is the stimulation of the universe's development.

The process of universe's development is started up by wuji. Then wuji led to taiji or yin and yang (also liang yi "two symbols"). Two symbols became four symbols. Subsequently, four symbols became bagua. And at last, bagua describes the myriad things of creation.
at 00:00

This is a question, rather than a comment. The concept of yin and yang, and the taijitu arise from Chinese philosophy, but the word "taijitu" seems to me to be a Japanese word. Is this true, and if so, how did the Japanese influence occur?

It does have a Japanese sound, but, no, it's not a Japenese word. The closest sounding word I know of in Japanese is "Taejutsu", which is a word associated with forms of Ninjutsu.

There may be a word "taijitsu", but no "taijitu" because the last sound, "tu", doesn't exist in Japanese. They say "tsu", which sounds like the word "its" in english.