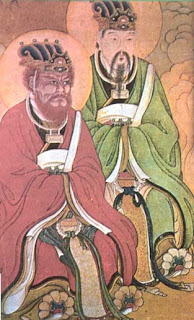 ), a term used from the second millennium BC to the present day, as pronounced according the modern Mandarin dialect. Literally the term means "Above Emperor

", which is taken to mean "Lord On High

", "the Supreme God", "Above ", or "Celestial Lord". Its meaning is similar to the term dyeus used by Indo-European peoples. Another title of Shangdi is simply Di (帝). Shangdi is chiefly associated with Heaven. From the earliest times of Chinese history, and especially from the Zhou Dynasty

). Tian is a word with multiple meanings in the ancient Chinese language, it can either mean the physical sky or the presiding God of Heaven. When Tian is used in the latter sense, it has the same meaning as Shangdi. By the time of the Han dynasty, the influential Confucian scholar Zheng Xuan

declared that "Shangdi is another name for Tian". Shangdi is also the name given for God in the Standard Mandarin Union Version of the Bible. Shen 神 (lit. spirit, or deity) was also adopted by Protestant missionaries in China to refer to the Christian God. Shangdi is never represented with images or idols in Chinese tradition.

Shangdi is considered by some to be the Creator of the universe. If this is true, he would predate the later Daoist creation story of Pangu around 200 AD by at least 500 years.

From the earliest eras of Chinese history, Shangdi was officially worshipped through sacrificial rituals. Shangdi is believed to rule over natural and ancestral spirits, who act as His ministers. Shangdi is thought to be the Supreme Guide of both the natural order and the human order. The ruler of China in every Chinese dynasty would perform annual sacrificial rituals to Shangdi at the great Temple of Heaven

in the imperial capital. During the ritual a completely healthy bull would be slaughtered and presented as an animal sacrifice to Shangdi. It is important to note that (such as the Jewish god, Yahweh

and the Muslim god, Allah

) Shangdi is never represented with either images or idols. Instead, in the center building of the Temple of Heaven, in a structure called the "Imperial Vault of Heaven", a "spirit tablet" (神位, or shénwèi) inscribed with the name of God is stored on the throne. That name is "Supreme Sovereign God of Heaven" (皇天上帝, Huangtian Shangdi). During an annual sacrifice, the emperor would carry these tablets to the north part of the Temple of Heaven, a place called the "Prayer Hall For Good Harvest

s", and place them on that throne.

Shangdi is also one of the main names used by Chinese Christians for the Christian God. It was first used in the southern China edition of the Chinese Union Version

, a Mandarin Chinese translation of the Christian Bible. Orthodox Christans and 19th century British Protestant missionaries in China, such as James Legge, used the name Shangdi to refer to the Christian God, while American Protestant missionaries in northern China in the early 20th century preferred the alternative Shen (神, pinyin: Shén), and another edition was printed reflecting this usage. By contrast, historically, Chinese Catholics have predominantly used the term "Tian Zhu" (天主, pinyin: tian1 zhu3; literally, "Lord of Heaven") to address God. Chinese philosophers of religion also use the name Shangdi to refer to the philosophical God. Newer versions of Chinese bibles that uses "Shen" add a space known as nuo tai before the character (" 神") to preserve formatting of the "Shangdi" editions. Some scholars like Matteo Ricci (Jesuit) and James Legge asserts that Shangdi is same as the Christian God after studying the Chinese Classics.
at 00:01