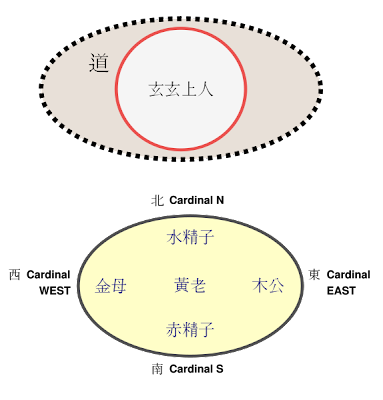 In Chinese tradition, the Chinese creation story explains the beginning of the universe. It begins with a black egg in which the Earth, heavens, and Pangu exist together as one. Pangu cracks open the egg, thus creating the universe. Pangu then creates Earth and Sky. Nüwa made the first members of mankind from yellow clay.

In Scroll One Chapter One of Pantao Yen Log or The Feast of Immortal Peaches, Daozu Lao Tsu (道祖老子) introduced the genesis starting with the definition of Tao, in simpler less ambiguous descriptions than the starting chapter in Tao Te Ching. Tao according to Daozu is the infinite primodial wuji, out of which a supra-being Xuanxuan Shangren (玄玄上人) was incubated. At the same time the cardinal south crystalized another supra-being Chi Jingzi (赤精子), cardinal north Shui Jingzi (水精子), cardinal east Mugong (木公), cardinal west Jinmu (金母), in the cardinal center Huanglao (黃老) were formed, collectively also revered as the Five Olds (五老) as all are over ten thousand years old.

Creation of lives including man was by Jinmu and Mugong after they breathed qi into an incubator ding. A male and female child were born from this breath of life. The excess qi escaped and became other forms of lives on earth. Supra-beings such as Xuanxuan Shangren and the Five Olds were not Yuanren beings but more primordial concepts of creation.

In a follow up book called Tiantang Yiuchi 天堂遊記 the same creation story was narrated and given more details in Chapter Four and Chapter Seven. Xuanxuan Shangren transformed into the Three Pure Ones and again transformed to the Five Olds or Five Supremes before the first man and woman were incubated. They were allegorically the same as Pangu from the Chinese mythology and Adam and Eve of Christianity. And it was further explained by Daozu Lao Tsu who is Tai Ching 道德天尊 that the 9.6 Billion original souls Yuanling 原靈, were produced and multiplied from the first man and woman. The fall of man was given an explanation as these yuanling were muddied on earth.
at 00:07